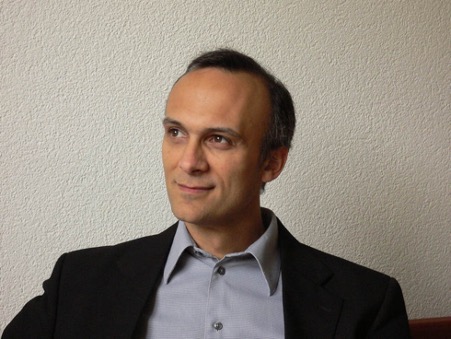 Erik Oña was born in 1961 in Córdoba, Argentina. He studied composition and conducting at the state University in La Plata, Argentina and the State University of New York at Buffalo, USA. His most influential teachers included Virtú Maragno in counterpoint, Gerardo Gandini and Mariano Etkin in composition, and Guillermo Scarabino and Pedro Ignacio Calderón in conducting. He received prizes and commissions from  numerous ensembles, institutions, and festivals such as the Nouvel Ensemble Moderne Montreal (Forum ’91), De Ijsbreker, Nieuw Ensemble, Stuttgart Opera, Hannoverer Tage für Neue Musik, European Music Month, Ensemble Intercontemporain, Warsaw Autumn, Wittener Tage für neue Kammermusik, Schola Heidelberg, Davos Festival, Camerata Variabile and Basler Madrigalisten. He was also a fellow of the Akademie Schloss Solitude in Stuttgart (1996), the IRCAM in Paris (1998) and the ZKM in Karlsruhe (1998 and 2000).

His works show an extremely acute ear, a special interest on timbre, and a fine sensibility towards the physical and acoustic reality of each instrument. The catalogue ranges form solo and chamber music works, to ensemble and orchestra, sometimes with electronics. Egbert Hiller pointed out in the music “a dichotomy between emotional freedom and structural restrain: a productive field of tension that Oña has explored to its imaginary limits.” Throughout his career, Erik Oña conducted more than 150 world premieres of chamber music, opera, and music theater.

From 1989 to 1993 Erik Oña taught composition and orchestration at the State University in La Plata, Argentina. In 1993 he founded together with the composer Gabriel Valverde the Centre for Advanced Studies in Contemporary Music (CEAMC) in Buenos Aires. He taught composition and computer music at the Kunitachi College of Music in Tokyo (1995/97/99) and at the universities of Buffalo (1998-2001) and Birmingham, UK (2001-2003), where he remained an Honorary Research Fellow. From 2003 he was Professor of composition and Director of the Electronic Music Studio at the Basel Academy of Music in Switzerland. In such capacity, he was also involved in a collaboration with the Catholic University of Porto (Portugal) where he actively contribute to the Ph.D Program in Science and Technology of the Arts.